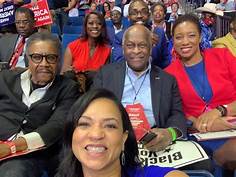 You have to feel for a guy who jigged so hard for Mr. trump that it cost him his life. Imagine having cancer and attending a trump rally in the midst of the coronavirus with all those trump cult followers who chose to go without masks. And yet that’s what the dearly departed Herman Cain did. (That’s Herman and his friends in the colored section.)

Cain literally died from selling out to trump, there are lots of other right-wing politicians who are dying a political death as a result of hitching their wagon to the most corrupt and incompetent leader in the history of these United States. (I see you Susan Collins.)

It has gotten so bad for Dear Leader that he is now calling for the postponement of the upcoming general elections because of his poor poll numbers. We should have known that a man like Donald trump would not go quietly into the night. His ego and his personality disorder will not allow him to accept such a public defeat. What’s sad is that he has undermined the entire electoral process with this phony vote by mail scam he has going. He can prove none of what he is alleging, and it’s all a big lie. But he knows that, and so do the other people in his camp who are going along with ridiculous pronouncements.

I am not sure what will happen in November. Four months is a long time in politics. But I do know one thing, and that’s if Donald trump was leading in the polls today you would hear zero talk of voter fraud and moving back the elections.

Still, we should take heart. I am not an expert on the Constitution, but I know enough to know that Mr. trump’s scheme could never fly. Unless, of course, he marshals his troops and tries to wage an all out war against the the American government. Don’t laugh, there are folks who, like Herman Cain, are willing to give their lives for Dear Leader.

The thought of that should keep us all up at night.

Get the Most from a Zoom Meeting with Your Financial Adviser