Among the targets hit in the facility are apparently tanks used to hold flammable gas, and separation towers critical to its operation. 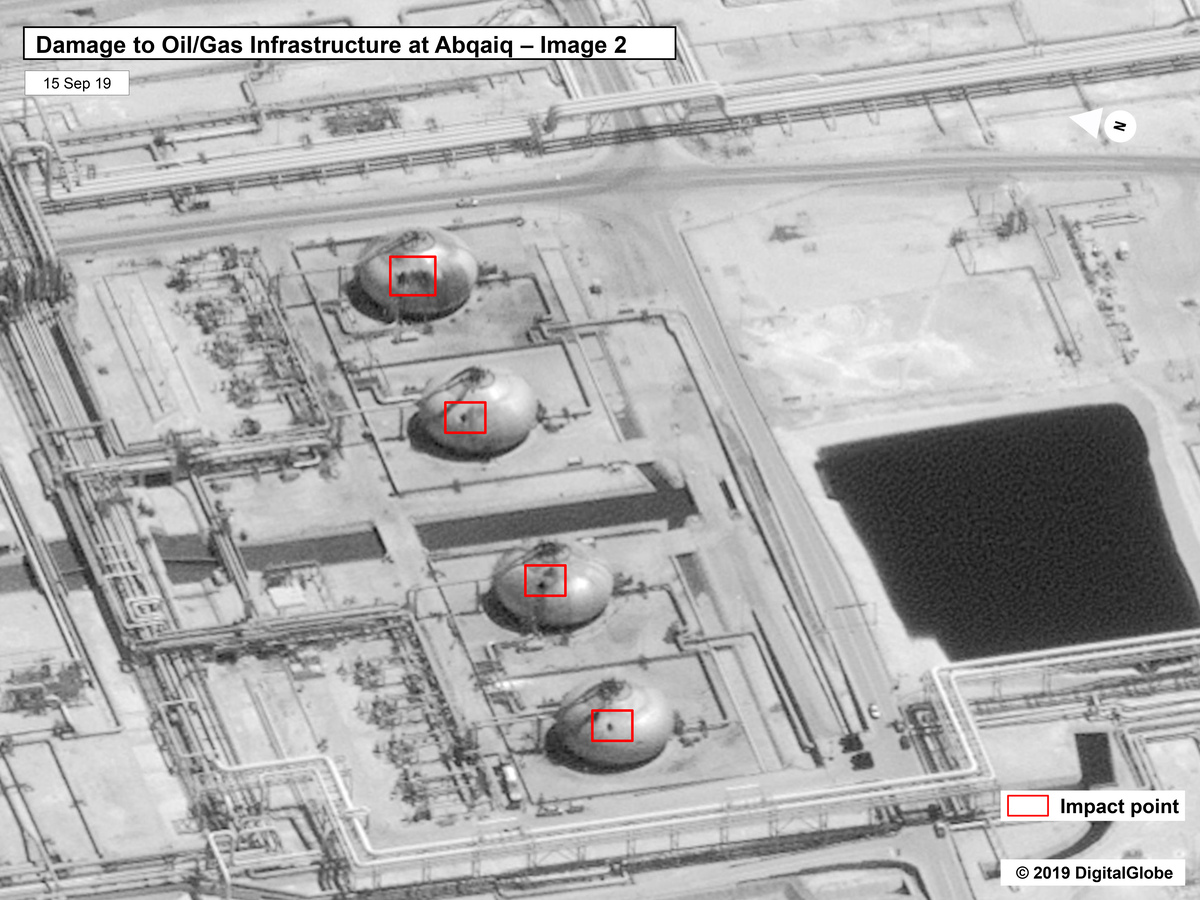 Among the targets hit in the facility are apparently tanks used to hold flammable gas, and separation towers critical to its operation.

Iran almost certainly had some role in a major attack on an oil production facility in Saudi Arabia, according to independent analysts reviewing the available evidence.

The question is how big.

The attack came on Sept. 14. Multiple drones or missiles struck Saudi Aramco’s Abqaiq facility, causing massive damage and crippling the nation’s oil production. The production of 5.7 million barrels of crude oil per day had to be suspended, according to the company.

“We want to find definitively who did this,” President Trump said in a press briefing on Monday. “We pretty much already know,” he added, without elaborating.

Iran has categorically denied any involvement in the attacks, calling such accusations “maximum lies,” according to reports in Iranian state media.

But experts say the types of targets chosen within the facility, both in number and type, suggest a level of sophistication difficult to explain without Iranian involvement.

Abqaiq is the linchpin of oil production for the Gulf nation, according to Joshua Shifrinson, an associate professor of international relations at Boston University who has conducted an extensive analysis. A number of chemical processes are carried out at the site, but perhaps the most important is the separation of oil from highly flammable hydrogen-sulfide gas.

That separation is done on-site using a series of custom-built “stabilization towers.” At least some of those towers appear to have been damaged, according to commercial satellite imagery released by the U.S. government. “Whoever did it knew what the right towers were,” Shifrinson says. That’s no small feat on the sprawling site.

In addition, the images show damage to several tanks used to hold flammable gas, according to I. Yucel Akkutlu, a professor of petroleum engineering at Texas A&M University. “Very likely they targeted these because they are more like in-place bombs waiting for ignition,” he said via email.

Houthi rebels, who are at war with a Saudi-led coalition in Yemen, claimed responsibility, yet that seems unlikely, says Fabian Hinz, a research associate at the James Martin Center for Nonproliferation Studies in Monterey, Calif. Hinz has tracked Iranian transfers of drone and ballistic missile technologies to the Houthis in recent years. There’s more recent evidence to suggest that the Iranians have helped the rebel group develop a sophisticated cruise missile. But that cruise missile appears too small to reach Abqaiq. “I’m having extreme doubts that we have anywhere close to the range to target the facility from Yemen,” Hinz says.

Other weapons, such as an advanced drone the Houthis claim to have developed, may be able to cover the distance, but there’s a second problem: the apparently sophisticated nature of the strike. Imagery shows over 17 impact points, Hinz says. He believes an even larger number of missiles or drones would have to have been launched.

“Would the Houthis be capable of flying a single drone or two drones into Abqaiq? I would say yes,” Hinz says. “But would they be able to conduct such a vast coordinated mission to strike the facility with so much success? I would honestly say no,” he says. 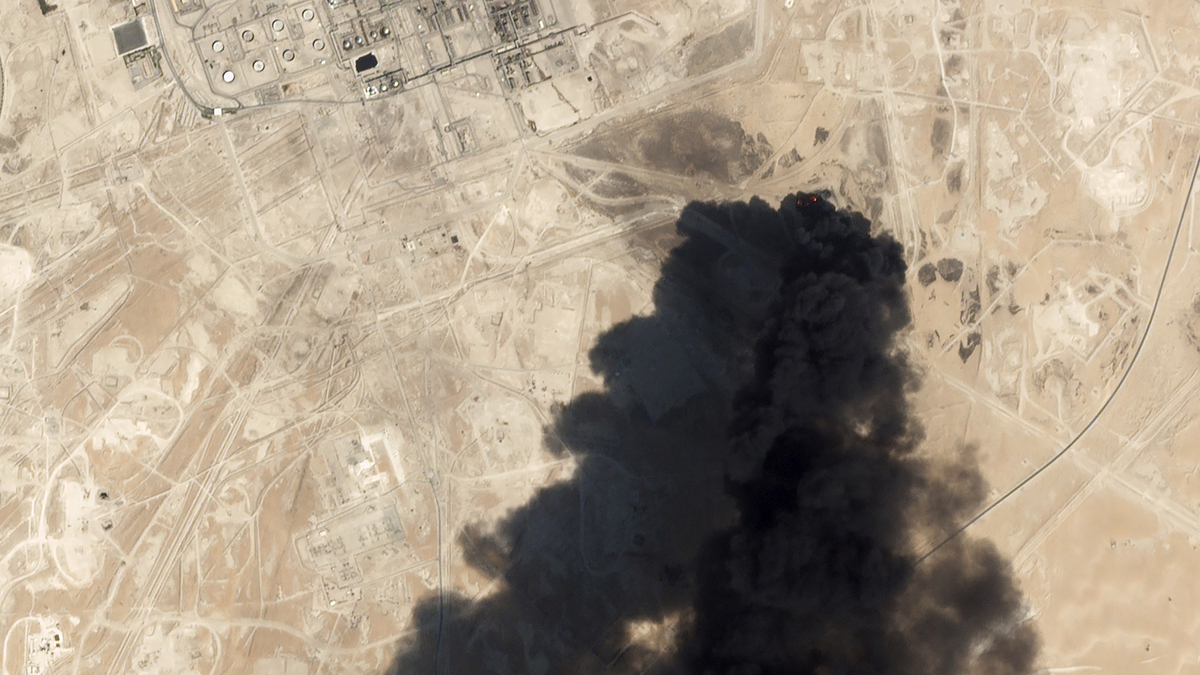 But there are few other options for where such a large-scale attack could have come from. One option would have been similar Iranian proxy groups in Iraq. Iraqi officials have categorically denied such a possibility, and so far the U.S. has not contradicted their statements.

Another possibility might be a launch from boats in the Persian Gulf. But Hinz says it’s likely that extensive U.S. surveillance in the Gulf would have picked it up.

That leaves Iranian territory itself. “If it is traced back to Iran, and if the attack came from Iranian territory, then I think this is a big deal,” says Ariane Tabatabai, a political scientist with the Rand Corp.

But Tabatabai notes that even if a proxy were involved, she believes such a large and complex strike would have required signoff at the highest levels by Iranian authorities. “If it is traced back to Iran, it would likely be coming from the highest levels — from the supreme national security council and OK’d by the supreme leader,” she says.

Tabatabai believes that the attack is a direct response to crippling sanctions imposed by the U.S. “From their perspective, why wouldn’t they do something like this?” Tabatabai says. “They have nothing to lose; their economy has been tanking.”

But Ali Vaez of the International Crisis Group warns that the U.S. and its allies have plenty to lose if they decide on military action. “Any retaliation against Iran, I think, is more likely than not to prompt an Iranian counterattack,” he says. “That then risks inflaming the entire region.”

Bushfires In Australia Kill 11 As The Flames Sweep Toward Sydney : NPR