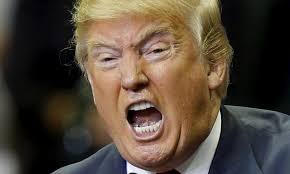 The following article was written by George T. Conway for The Atlantic, and it is a must read for these troubled times in America.

“On a third-down play last season, the Washington Redskins quarterback Alex Smith stood in shotgun formation, five yards behind the line of scrimmage. As he called his signals, a Houston Texans cornerback, Kareem Jackson, suddenly sprinted forward from a position four yards behind the defensive line.

Jackson’s timing was perfect. The ball was snapped. The Texans’ left defensive end, J.J. Watt, sprinted to the outside, taking the Redskins’ right tackle with him. The defensive tackle on Watt’s right rushed to the inside, taking the offensive right guard with him. The result was a huge gap in the Redskins’ line, through which Jackson could run unblocked. He quickly sacked Smith, for a loss of 13 yards.

Special-teams players began taking the field for the punt. But Smith didn’t get up. He rolled flat onto his back, pulled off his helmet, and covered his face with his hands. He was clearly in excruciating pain. The slow-motion replay immediately showed the television audience why: As Smith was tackled, his right leg had buckled sharply above the ankle, with his foot rotating significantly away from any direction in which a human foot ought to point. The play-by-play announcer Greg Gumbel said grimly, “We’ll be back,” and the network abruptly cut to a break. There was nothing more to say.

Even without the benefit of medical training, and even without conducting a physical examination, viewers knew what had happened. They may not have known what the bones were called or what treatment would be required, but they knew more than enough, and they knew what really mattered: Smith had broken his leg, very badly. They knew that even if they were not orthopedists, did not have a medical degree, and had never cracked open a copy of Gray’s Anatomy. They could tell—they were certain—something was seriously wrong.

And so it is, or ought to be, with Donald Trump. You don’t need to be a weatherman to know which way the wind blows, and you don’t need to be a mental-health professional to see that something’s very seriously off with Trump—particularly after nearly three years of watching his erratic and abnormal behavior in the White House. Questions about Trump’s psychological stability have mounted throughout his presidency. But those questions have been coming even more frequently amid a recent escalation in Trump’s bizarre behavior, as the pressures of his upcoming reelection campaign, a possibly deteriorating economy, and now a full-blown impeachment inquiry have mounted. And the questioners have included those who have worked most closely with him.

No president in recent memory—and likely no president ever—has prompted more discussion about his mental stability and connection with reality. Trump’s former chief of staff John Kelly is said to have described him as “unhinged,” and “off the rails,” and to have called the White House “Crazytown” because of Trump’s unbalanced state. Trump’s former deputy attorney general, Rod Rosenstein, once reportedly discussed recruiting Cabinet members to invoke the Twenty-Fifth Amendment, the Constitution’s provision addressing presidential disability, including mental disability.

Rosenstein denies that claim, but it is not the only such account. A senior administration official, writing anonymously in The New York Times last September, described how, “given the instability many witnessed, there were early whispers within the cabinet of invoking the 25th Amendment”—but “no one wanted to precipitate a constitutional crisis.” And NBC News last week quoted someone familiar with current discussions in the White House warning that there is “increasing wariness that, as this impeachment inquiry drags out, the likelihood increases that the president could respond erratically and become ‘unmanageable.’” In September, a former White House official offered a similar assessment to a Business Insider reporter: “No one knows what to expect from him anymore,” because “his mood changes from one minute to the next based on some headline or tweet, and the next thing you know his entire schedule gets tossed out the window. He’s losing his shit.”
Even a major investment bank has gotten into the mix, albeit in a roundabout way: JPMorgan Chase has created a “Volfefe Index”—named after Trump’s bizarre May 2017 “covfefe” tweet—designed to quantify the effect that Trump’s impulsive tweets have on interest-rate volatility. The bank’s press release understatedly observed that its “volatility fair value model” shows that “the president’s remarks on this social media platform [have] played a statistically significant role in elevating implied volatility.”

The president isn’t simply volatile and erratic, however—he’s also incapable of consistently telling the truth. Those who work closely with him, and who aren’t in denial, must deal with Trump’s lying about serious matters virtually every day. But as one former official put it, they “are used to the president saying things that aren’t true,” and have inured themselves to it. Trump’s own former communications director Anthony Scaramucci has on multiple occasions described Trump as a liar, once saying, “We … know he’s telling lies,” so “if you want me to say he’s a liar, I’m happy to say he’s a liar.” He went on to address Trump directly: “You should probably dial down the lying because you don’t need to … So dial that down, and you’ll be doing a lot better.”

That was good advice, but clearly wishful thinking. Trump simply can’t dial down the lying, or turn it off—even, his own attorneys suggest, when false statements may be punished as crimes. A lawyer who has represented him in business disputes once told me that Trump couldn’t sensibly be allowed to speak with Special Counsel Robert Mueller, because Trump would “lie his ass off”—in effect, that Trump simply wasn’t capable of telling the truth, about anything, and that if he ever spoke to a prosecutor, he’d talk himself into jail.

Trump’s lawyers in the Russia investigation clearly agreed: As Bob Woodward recounts at length in his book Fear, members of Trump’s criminal-defense team fought both Trump and Mueller tooth and nail to keep Trump from being interviewed by the Office of Special Counsel. A practice testimonial session ended with Trump spouting wild, baseless assertions in a rage. Woodward quotes Trump’s outside counsel John Dowd as saying that Trump “just made something up” in response to one question. “That’s his nature.” Woodward also recounts Dowd’s thinking when he argued to Trump that the president was “not really capable” of answering Mueller’s questions face to face. Dowd had “to dress it up as much as possible, to say, it’s not your fault … He could not say what he knew was true: ‘You’re a fucking liar.’ That was the problem.” (Dowd disputes this account.) Which raises the question: If Trump can’t tell the truth even when it counts most, with legal jeopardy on the line and lawyers there to help prepare him, is he able to apprehend the truth at all?

Behavior like this is unusual, a point that journalists across the political spectrum have made. “This is not normal,” Megan McArdle wrote in late August. “And I don’t mean that as in, ‘Trump is violating the shibboleths of the Washington establishment.’ I mean that as in, ‘This is not normal for a functioning adult.’” James Fallows observed, also in August, that Trump is having “episodes of what would be called outright lunacy, if they occurred in any other setting,” and that if he “were in virtually any other position of responsibility, action would already be under way to remove him from that role.”

Trump erratic behavior has long been the subject of political criticism, late-night-television jokes, and even speculation about whether it’s part of some incomprehensible, multidimensional strategic game. But it’s relevant to whether he’s fit for the office he holds. Simply put, Trump’s ingrained and extreme behavioral characteristics make it impossible for him to carry out the duties of the presidency in the way the Constitution requires. To see why first requires a look at what the Constitution demands of a president, and then an examination of how Trump’s behavioral characteristics preclude his ability to fulfill those demands.

The Framers of the Constitution expected the presidency to be occupied by special individuals, selfless people of the highest character and ability. They intended the Electoral College to be a truly deliberative body, not the largely ceremonial institution it has become today. Because the Electoral College, unlike Congress and the state legislatures, wouldn’t be a permanent body, and because it involved diffuse selections made in the various states, they hoped it would help avoid “cabal, intrigue and corruption,” as Alexander Hamilton put it in “Federalist No. 68,” and deter interference from “these most deadly adversaries of republican government,” especially “from the desire in foreign powers to gain an improper ascendant in our councils.”

Though the Constitution’s drafters could hardly have foreseen how the system would evolve, they certainly knew the kind of person they wanted it to produce. “The process of election affords a moral certainty,” Hamilton wrote, “that the office of President will never fall to the lot of any man who is not in an eminent degree endowed with the requisite qualifications.” “Talents for low intrigue, and the little arts of popularity,” might suffice for someone to be elected to the governorship of a state, but not the presidency. Election would “require other talents, and a different kind of merit,” to gain “the esteem and confidence of the whole Union,” or enough of it to win the presidency. As a result, there would be “a constant probability of seeing the station filled by characters pre-eminent for ability and virtue.” This was the Framers’ goal in designing the system that would make “the choice of the person to whom so important a trust was to be confided.” [Read more]

Donald trump, for better or for worse, is the current president of the United States. And no matter what happens in 2020, these past few years will forever leave a stain on this republic.

There is no doubt that the 25th Amendment should be invoked, but given the toxic nature of our body politic, that will never happen.